The Angel Gabriel tells Mary about her pregnancy.

Following the cancelling of December’s Family All-Age Worship due to bad weather, the Eucharist Service on Sunday 17th December began with a series of Christmas Story Sketches based in modern society.  The sketches included: the Angel Gabriel informing Mary she would become pregnant, the Diaries of Joseph and Theodore (Mary’s father), three old women gossiping about Mary’s pregnancy and Mary discussing her journey to Bethlehem.  The performance was completed by a short poem read by young Bob Capner, his first time reading in Church. 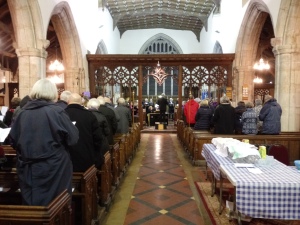 A good audience turned out on a cold evening at Guilsfield Church for the annual Guilsfield Singers Christmas Concert.  They were treated to lovely programme of Christmas Carols and Music both well known and some less familiar.  There was the opportunity for the audience to join in community singing of some of the most popular carols.  The Singers were also saying goodbye to their Musical Director of 11 years, Gerry Howe, and made a presentation to him at the end of the performance, as this was his final concert.  Following the concert, there was mince pies and mulled wine to send everyone on their way suitably warmed.

Despite the snow the coffee morning to raise money for the Boiler Appeal on 8th December was a great success.  A good number of people turned up to enjoy the real coffee, mince pies and other goodies despite the weather.  Thanks to Diane and Jen for organising it with proceeds and donations on the day going towards the Boiler Appeal.

A young visitor viewing the bells in the Church tower

An Open Day was held at the Church on the morning of Saturday 18th November.  In addition to being able to look around the Church, the registers for Births, Marriages and Deaths were available for visitors to see any entries for their families.  Those visitors who were fit and brave enough were able to go up the tower to see the bells and out on the top to see the magnificent view over the village; at least it was dry if a little cold.  The money raised from the sale of refreshments etc will go towards the Boiler Appeal.

On Friday 27th October, we were treated to a most enjoyable concert by the Dutch Vocal Ensemble ‘Pavane’ singing a selection of mostly British folk and popular songs from across the ages in the A’capella style.  The concert included light-hearted numbers ‘Dashing Away with the Smoothing Iron’ and ‘The Goslings’ as well as classics such as ‘Loch Lomond’ and ‘Danny Boy’ through to ‘True Colours’ recently popularised by Cyndi Lauper.  Proceeds from the concert will go towards the Church Boiler Appeal and we just about managed to get the Church warm enough for the Concert to go ahead despite the boiler not working.  Many thanks to ‘Pavane’ for coming all the way from the Netherlands to perform for us at St Aelhaiarn’s under their conductor Esmeralda Schütz.

The Lord is my Shepherd Day – 30th September

Our Harvest celebrations continued on Saturday 30th September with three related events centred around the 23rd Psalm, ‘The Lord is my Shepherd’ to recognise the importance of sheep farming to our local agricultural community.  It was all kicked off by a sheep related craft afternoon in the Old School, where both children and adults enjoyed making cotton wool and cotton bud sheep, button sheep pictures and sheep cup cakes. 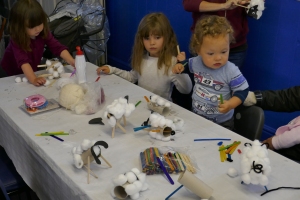 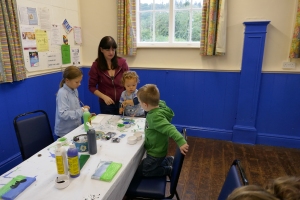 Next up was a Shepherd’s Pie Supper in the Old School when we again enjoyed an excellent meal of home-made shepherd’s pie (or alternative) and again including cheese and biscuits and dessert; after which we were all replete following two excellent meals in two days. 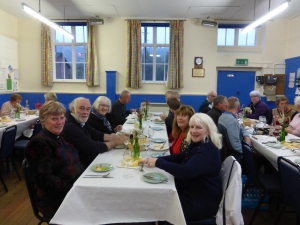 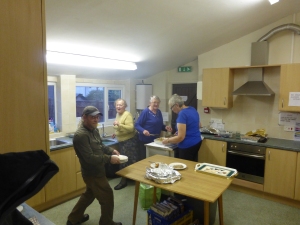 When then made our way to Church for a most enjoyable and uplifting service of music, reflections and pictures on the theme of the 23rd Psalm.  This included various musical settings performed by the Ladies Singing Group, Sarah Garrett and Bethan Scotford, accompanied by Philip Harratt on the electric piano and also featured the flute of Mari van Hulzen.  As well as various reflections, Liz Mathieson described the life of a biblical shepherd and the congregation enjoyed singing several hymn versions of the Psalm.

After the Church had been decorated, our Harvest celebrations started on Friday 29th September with the Harvest Festival Service for Guilsfield School in the afternoon, which was largely carried out by the Children.

Our celebrations continued in the evening with a Harvest Evensong Service, which was followed by a Harvest Supper in the Old School, where we enjoyed a satisfying meal of home-made vegetable soup followed by cheese and biscuits and apple pie.

Following the meal we were treated to some light-hearted entertainment, including from the Church Choir and the accordion of Philip Harratt; concluding with some communal singing of well-known songs.

A very successful coffee morning in aid of the Macmillan Cancer Care charity was held in Church on Friday 22nd September.  A busy morning provided plenty of opportunity to chat and enjoy the wide variety of cakes on offer.  The event raised £368.55 for the charity. Many thanks to Diane and Jen for organizing the event.

Exhibition of Quilts and Handicrafts

On  the Bank Holiday Weekend,  Saturday 26th, Sunday 27th  and Monday 28th August, an Exhibition of Quilting and Handicrafts made by local people was held in Church.  For a selection of pictures and brief report visit the Craft Exhibition page.

A Service was held at Guilsfield Church on Wednesday 9th August 2017 to celebrate the 125th Anniversary of the Mothers Union in the St Asaph Diocese attended by approximately 100 people, including members from across the Montgomery Archdeaconry.  This was in the form of a Songs of Praise with 17 favourite hymns sung by the congregation and three numbers performed by the Singing Group.  This was followed by a well earned cup of tea and refreshments in the Community Centre.

On Thursday 3rd August 2017, 10 members of Guilsfield Church visited Pentre Llifior Methodist Chapel near Berriew for a very interesting talk by Andrew Mathieson on it’s history and restoration.  This was followed by a most enjoyable lunch at the converted stable across the road.  Further information on the Chapel can be found here or here. 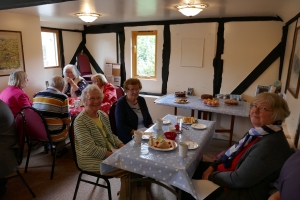 Lunch at Pentre Llifior after visiting the Methodist Chapel 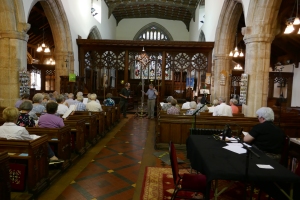 “Songs from the Musicals” Show 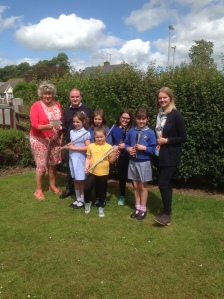 Following the “Songs from the Musicals” Show held in Guilsfield Church on Saturday 10th June and presented in conjunction with Guilsfield School pupils, Joan (JJ) Jones presented a cheque for £100 to Huw Jones, headmaster; Guilsfield Wind Band and Mari van Hulzen, their director.

Dorothy Wood:  This is the Reality of the Power of the Gospel that Jesus suffered to make available to us and for us.  The Gospel is not merely a belief but a wonderful experience for the true follower of Christ.