Historians record that the history of Guilsfield goes back to the 5th Century AD . It’s Welsh

name is Cedigfa, which translates as hemlock of which there used to be a large abundance.  In the 6th Century it became inextricably linked with Aelhaiarn, the patron saint, who has a separate page on this website.  With its sister church, Capella of Pool, Guilsfield was annexed to the mother church of Meifod in the 14th or 15th century but on more than one occasion appropriated by the Bishop of St Asaph.  Through the next two or three centuries, the history of both village and church were varied and reflected population decline and growth.  One undated reference from the 19th century tells that Guilsfield was an extensive parish with 6 townships and the chapelry of Llanfechain ( several miles north).  This entry refers to the living as being a vicarage in the Arch deaconry and Diocese of St Asaph, rated in the Kings Book at £11 and endowed with a fourth part of the tithes (the rest belonging to Christ Church, Oxford). 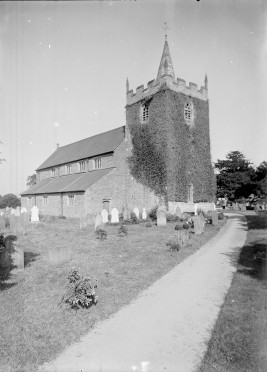 We include some brief highlights of the features of the church, as well as the tower and bells, and a full history of the church can be obtained from the Vicar.  Obviously, more modern history is available both of the village and church on various web sites and in literature in the church. 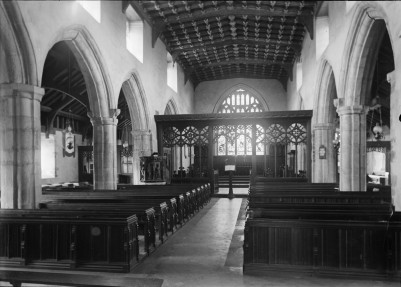 Contrast the photo above with those from Christmas 1873, before the Victorian restoration: 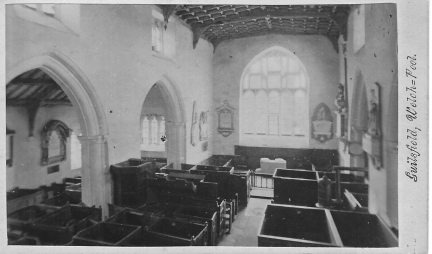 Consideration of the restoration plans at a Vestry meeting on 13th April 1877 was reported in a local paper at a Restoration Vestry Minute and the opening services on 7th August 1879 at Restoration of Guilsfield Church Opening Services.  A entry in ‘Bygones‘ from 1873 offers an amusing opinion of the pre-restoration pews.

The Victorian re-ordering involved some external changes as well, as can be seen from these earlier views of the Church: 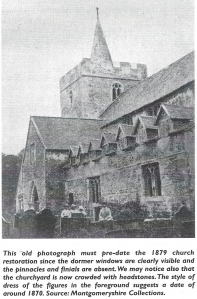 A former Vicar, David G Rees, who emigrated to Canada, reflects on his time in Guilsfield  in Guilsfield in Retrospect 1950 to 1958.

A leaflet with instructions for a short walk around Guilsfield pointing out some of it’s history and beginning at the Church is available to view, print and download at Guilsfield History Walk.