The saint who is accredited with inspiring this church, St Aelhaiarn, also has a couple of other dedications in Wales, one being a church in Caernarfon, the other being a well in Gwynedd, he also has a granite monument dedicated to him in Verberie, France.

Historically, what we know about Aelhaiarn is this.  He was one of three brothers and Aelhaiarn, with his brothers Lwchaiarn and Cynhaiarn lived in the latter half of the 6th Century.  He was also a member of one of the ruling families of Powys and a benefactor of the British Church, which elevated him status upon his death to that of local saint.  His festival day is the first of November, which coincides with All Saints’ Day and it is thought that the Church in Guilsfield was originally dedicated to All Saints before being rededicated to St Aelhaiarn.  Not much is known about Aelhaiarn’s early life but piecing together different historical descriptions, as well as some of the more fanciful stories, it is likely that Aelhaiarn was born in Powys before going to North Wales to study and practice his religious beliefs, whilst being trained under St Beuno.  He was made a Deacon before returning to Mid Wales and inspiring, if not founding, the Church that was on the current site in the late 6th Century.

His name, Aelhaiarn, translates in English as “iron brow” and has inspired a rather 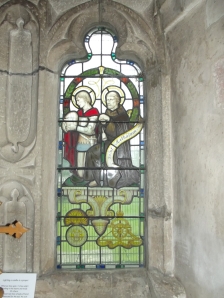 fantastic story about the man nicknamed as “The Snooping Saint”.  According to some historical sources, Aelhaiarn was in the service of a man called Beuno, possibly the same Bishop Beuno (to be sainted upon his death) who evangalised much of North Wales and founded a monastery in Caernarfonshire.  Apparently, Bueno was fond of a midnight stroll to a place called Llaynhayrne, approximately four miles away from where he lived, where he would kneel on a flat stone in the middle of the river and pray.  One night, the ever curious Aelhaiarn decided to follow him to find out just what he was up to.  Mid prayer, Beuno heard rustling in the bushes and saw the outline of a man hiding there and prayed to God to punish the lurker, if his intentions were not honourable.  Well God decided that idle curiosity was not honourable and sent a pack of wild beasts to punish the ‘snooper’ and they proceeded to tear him to little pieces.  Beuno then realised, possibly a little bit too late, you might think, who the snooper was and repented.  Well by then it was too late to stop the wild beasts as Aelhaiarn was on the ground in little pieces, so Beuno decided to
put him back together.  The only problem was that, as it was the middle of the night and therefore very dark, he couldn’t find one of the eyebrows.  So, the clever man that he was, he decided instead to use the metal tip of his pikestaff as a replacement, leaving Aelhaiarn to go through the rest of his life with an iron eyebrow, which, as we know, is what his name translates as.